About Infinigrad The Weird City Toolkit

Infinigrad: The Weird City Toolkit by Michael Raston (the author of Ordure Fantasy and the cool old-school sci-fi game Star Dogs) is a very unusual product. Why? Because it's neither a PoD nor a PDF (for the most part).

It is also part of the larger Infinigrad project which revolves around a fascinating, weird city setting, where the player characters are Guild Dogs, i.e. desperate mercenaries/troubleshooters that work for ancient, power hungry guilds. 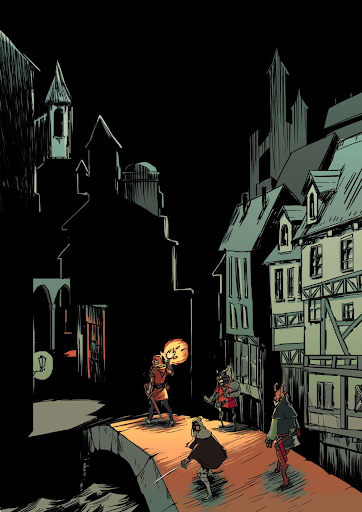 As a product, it is a bundle of automated tools for quickly generating details for fantasy urban environments, and is totally system neutral. Such tools come in the form of four HTML files which open up in your browser. The package also includes an "Introduction" PDF and a "Map Maker" PDF.

Let's see how these tools work.

The first is the Job Generator. Here's three screenshots of what you get clicking each button: 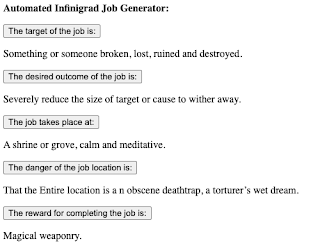 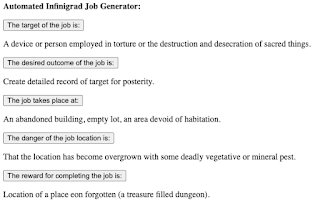 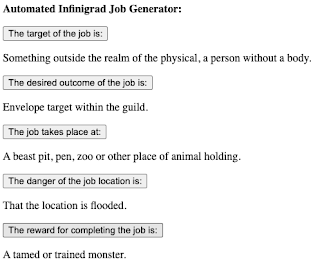 A fairly standard adventure generator, this is meant to produce inspiration for missions and adventures for guild dogs inside the Infinigrad city. Definitely designed to be used while prepping, but could also be used for GMs who enjoy running impromptu games. In both cases, if you don't like one of the results you just click the relevant button until you get something you can work with.

The second tool is the Building Stocker. This one has lots of buttons, and definitely they are not meant for you to push all of them all the times: they are there to be pushed when needed. Here's three screenshots with all the buttons pushed:

Lots to be found there. This could definitely be used for most location-based adventures, dungeons, etc. to stock lots of rooms.

The third tool is the Guild Dog generator. This one produces a systemless player character with interesting quirks. Here's three dogs: 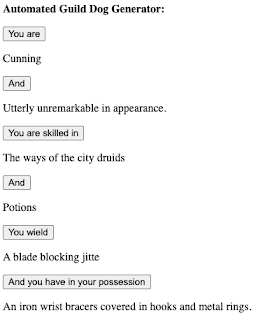 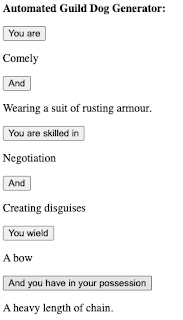 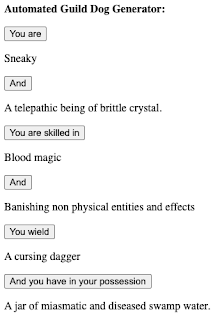 As you can see from the third image, things can get pretty weird.
The fourth tool, named Suburb Generator, is the meatiest. It is divided into A LOT of sections, actually making it a collection of several generators. Here's what you can find, with sample results: 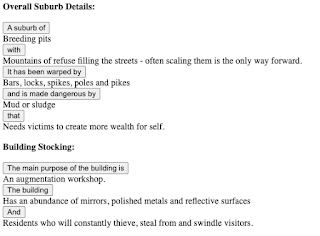 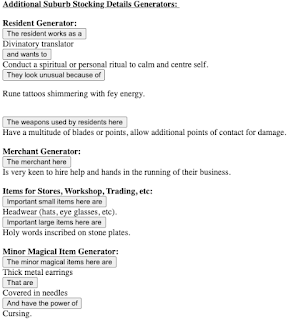 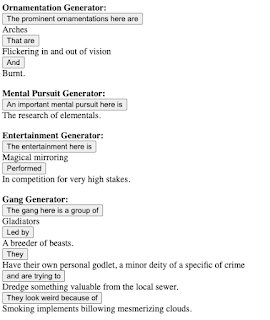 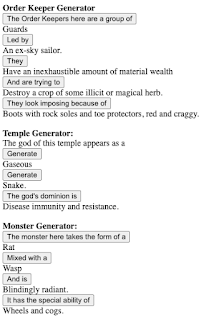 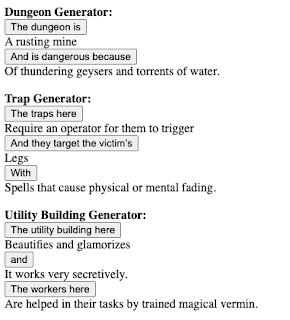 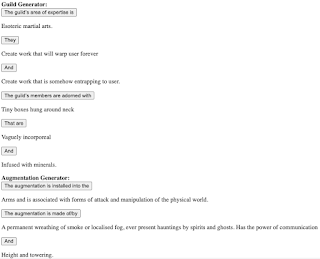 So much stuff in there! These can be very useful to create a really weird city and to run city adventures.

The Suburb Mapper PDF file is a more traditional tool with three gridded tables that require you to roll two dice (column and row), and the results are simple sketches of roads sections, building shapes, and building interiors, respectively. It's a bit strange that these tables have not been translated into another HTML tool, and the reason is because the results are images instead of plain text.

The last file is the Introduction to Infinigrad. This is a 2-page PDF with a short but very evocative text describing the past and present of the city, the story of its Guilds and how their conflicts shaped (and almost destroyed) Infinigrad.

So how is it? Well this is the type of thing we've seen in many OSR products through the years: tables and tables for generating lots of content, but this time it is not a book or a PDF (for the most part, at least). For GMs used to have an electronic device at the table, this might prove very handy.

I must say I'd love the HTML files to be a bit more flashy. Experimenting with some fancy font and colors might make it look more appealing. Not that the substance would change! All in all, I love random generators and I would recommend trying Infinigrad to anyone fascinated with weird settings and city adventures.