Yesterday SpaceOrange42 released Da Vinci's Engine, a new adventure for Ultima Forsan written by Mauro Longo and me, with art by Francesco Saverio Ferrara (the same artist of the Gold & Glory book). Da Vinci’s Engine is an Ultima Forsan adventure for three to six Novice heroes and it is the first scenario of the Ultima Forsan Legends series!

In this adventure, the heroes must venture into the battlefield of Marignano, near Milan, to find the most ingenious inventor of all history, Leonardo Da Vinci, and win him to the cause.

Da Vinci, featured as NPC in this adventure, is the first of the Seven Legends that will be available as Player Characters for the grand finale of Ultima Forsan Legends - Escape from Old York!

The adventure includes an Appendix with rules to buy, modify or create Armillary Armors: 20 feet tall anthropomorphic contraptions designed for the destruction of the living and the Dead!

Ultima Forsan Legends
Gather the Magnificent Seven of the Macabre Renaissance and enlist them into the craziest adventure of all history, a desperate fight against thousands of enemies to free the Pope King, held prisoner by Richard III in Ghastly England! COMING SOON!

So here's a bit of backstory of how this got published.

Ultima Forsan - Legends was released in Italian as a single book featuring two parts: part one features the seven scenarios mentioned above, one for each of the "Magnificent Seven". In each adventure, the heroes must, locate, negotiate, help, and in some cases rescue, one of the Macabre Renaissance Legends: actually Legendary characters that are introduced as NPCs. Who are they? 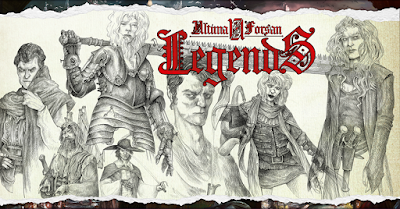 Leonardo Di Vinci, the most ingenious inventor of all history

Joan of Arc, heroine of the French Reconquest against the Dead, brought back to life by a mysterious group of heretics

Glyceria of Novgorod, the Saint Huntress, slayer of the Dead in the Ruthenian lands

Each of them is a mix of historical and fictional, in different proportions.

The series also spans through most of Europe, with the group visiting places in Italy, Spain, France, Switzerland, Ruthenia, and finally Britain, where the second part of the book begins. And how are the heroes traveling through Europe? They'll fly aboard the Pinta, a flying ship steered by legendary sky captain Christopher Columbus!

The second part of the book is the Escape from Old York campaign, where players have the option of using those Legendary Rank NPCs as Player Characters. After all, the task at hand is a Legendary one..!

Now we're finally able to release the seven adventures in English, and Da Vinci's Engine is the first in the list. The other six scenarios are ready and will be published in the next weeks, one per month!

We decided to add The Ultima Forsan Conversion Document to SWADE because we are releasing these adventures as they were when we first released in Italian, also considering that Ultima Forsan is a setting native to the Savage Worlds Deluxe edition, but the option to play with SWADE is there for those who prefer the latest edition rules.
Mauro and I are very happy with this release. Even though Ultima Forsan hasn't proved as popular, in English, as it is in Italy, Spain and Russia, it's a setting we love, and the general praise it has received and still receives makes us feel proud and also lucky to have been able to make it and share with the world gaming community in four different languages.
And to celebrate the return of Ultima Forsan, SpaceOrange42 has set the Ultima Forsan Setting Book at a discount price, so this is definitely the time to take a look, check the reviews it got so far (spoiler: 31 ratings averaging 4.5/5 stars!), and pick it up, if you want! A few days ago on Official Savage Worlds Facebook Group there was a nice post about Ultima Forsan, and I felt like telling bits of its design and publication history and background, so here's what I shared, mostly copied and pasted here, for the curious.

Ultima Forsan was my first published setting, written by my good friend Mauro Longo and me.
It is based on Mauro's original novel "Decameron of the Dead", which recounts the first outbreak of the Plague Florence during the XIV century.
For the setting, we decided to forward the time line by about 150 years, and imagined a world where medieval men and women learnt, after much of the world's civilization was destroyed, to live under the threat of the Plague of the Living Dead, and even begin to thrive, starting the Macabre Renaissance. We reimagined the Renaissance customs, institutions, states, etcetera, as they would adapt to a different world, more dangerous, less populated, ripe with opportunity... but also full of cultural, religious and political differences and conflict among the living.
After the Savage Setting was released, Mauro also wrote a novel, "Unglorious Guiscards", and five different Choose Your Own Adventure books. All of them are set in the same period of Ultima Forsan (and are not available in English, sorry!).
The setting itself was published in Italian, then in English, and after that it was licensed for Spanish and Russian editions (all of them can be found on drivethru). At the time, it was a bit of a record for an Italian RPG book!
What really makes me proud of Ultima Forsan is that, while it probably really is the grittiest Savage Settings, it is also a statement of the value of the human spirit, the courage to put aside differences and work together to face adversities and fight for a better future for all.
Ultima Forsan can be found on DrivethruRPG!
at August 28, 2020 No comments: