My current project is Curse of Aufgartz - A Savage Worlds Solo/GMless Game.

It is a dark fantasy story with a heavy Diablo 1 feel, offering several quests that you can tackle, and that will keep you busy for about one to four hours, depending on which optional rules you use.

Here's an early sketch for The Chainer, one of the agents of the Curse that you'll have to face in the game. Looks familiar?

Curse of Aufgartz builds on the experience I developed from the Gold & Glory solo rules, as well as from reading and playing the recently released Deadlands - Crater Lake Chronicles.

The design goal is to make a game that you can play with no GM, alone or with a group.

It works a bit like a Choose Your Own Adventure book, because you make story choices and go back and forth through the book, and also a bit like a board game.

You choose which quests you want to tackle, in a structure that resembles a typical Savage Worlds Plot Point Campaign, with Plot Points and secondary quests.

Each quest is a two-page spread, and it does not ask you to flip the book back and forth. All the options, events and game contents are there in that two-page spread. You finish the quest, you return to Aufgartz (the "home base" chapter), and select a new one.

I'm so excited about this project because it involves more than writing a standard adventure. It needs a structure and and a set of procedures that will allow the book to function as a GM, using some tokens and trackers. 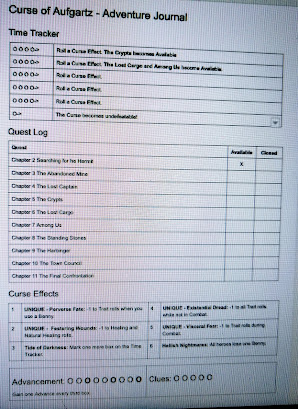 The current iteration of the game includes a single-sheet printout called Adventuring Journal, which features:

All these bits work together fine... so far! But I'll sure need a group of playtesters to check how it works for good!