ZineQuest4 is happening now, with 70 active projects as of today.

Lots of cool projects, but apparently less than usual, what with the decision to skip February, and August being the month of Gencon, and people trying to be on holiday, maybe.

But still more than enough projects to make a list! So let's get it going. 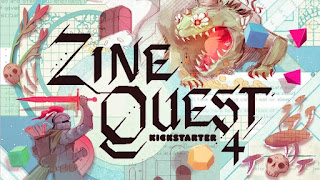 The Old-School Essentials ZineQuest4 Projects - plus a bunch of not-zine projects worth checking!

Please note this list includes active projects as well as some in pre-launch.

Delver Issue 5 - The fifth installment of the zine series that provides LOTS of random tables for the OSE referee. Each issue also includes an adventure. The previous issues are available at DrivethruRPG.

Inn to the Deep - A five-booklets deal by Bill Edmund, offering four dungeons, a bestiary, and an inn connecting the whole thing. Check out those sweet annotated maps!

The Beast of Borgenwold - A level 1-3 adventure with a big bad reanimated taxidermied manticore! Written by Harry Menear, with cool art by Yuri Perkowski.

Zines With Class For Old-School Essentials - Offers 5 new classes and advanced races for OSE, including a chimpanzee folk and necromancer. 5 more classes are listed as stretch goals, and each class is featured in its own individual zine. By Appendix N Entertainment.

Gary's Appendix - A zine with articles by various authors, offering advice, inspiration and guidance for OSE referees. At $1 fr the PDF, it's definitely worth checking.

The Scourge of Northland - By Jacob Fleming, a new adventure module in the same vein as Tower Silveraxe and Valley of the Manticore.

Worldbreaker / Dark Tides of Zaratos - A HUGE double-feature campaign offering a pirate/psionic campaign setting and adventure (Zaratos), AND a sourcebook to end your campaign world with a bang (Worldbreaker). The whole campaign actually delivers 6 zines!

Into the Space Worm - A dungeon adventure inside a colossal space worm, from Knight Owl Publishing, authors of the Old School & Cool zine series.

Old-School Solo Adventures - Four zines each with a scenario that can be played solo like choose-your-own-adventure books, or used in regular group play with a referee.

Secret of the Black Crag - Written by Chance Dudinack, author of The Black Wyrm of Brandonsford. Nuff said.

BIG EYE CHUNGUS - From Levi Combs (check the Phylactery zine!), a zine dedicated to those tentacled, big-eyed, floating sphere monsters of the deep. Not officially associated with Old-School Essentials, but still close enough to make it into the list, as the OSE Advanced Rules has the eye of terror monsters available. You know, those with beauty in their eye...

The Den of Nightmares and Sweets - A "spoopy" adventure for low level characters.

The Medieval Margin-agerie Zine - A generically osr of bizarre content, by Paul Baldowsky, acclaimed author of award-winning The Dee Sanction.

Ogre's 11 - Not OSE-licensed, but a zine with heist scenarios by Mark Finn. Plus I love puns.

Have I missed something? A new project has launched? Hit the comments so I can update the list

Axian Library is available! And Falkrest Abbey Is Coming! And More!

Five months after a stunning Kickstarter, the Axian Library zine collection PDF has been sent to backers and is available for everyone at DriveThruRPG.

I've got to say I'm very happy with the result, and hope all the backers will enjoy it. 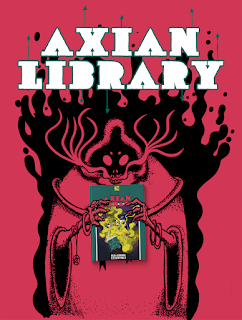 In the meantime, I've already started working on new projects! I've teamed up with Andrea Mollica to design a bunch (2? 3? 4?) of new dungeon adventures for Old-School Essentials.

The first one is Falkrest Abbey and the text is already pretty much finalized. If you're in the Old-School Essentials Facebook group you might have had a chance to grab an early playtest PDF.

Falkrest Abbey is an Old-School Essentials dungeon adventure for characters level 1-3, and features about 20 rooms with non linear exploration, puzzles, decision making & problem solving, a bit of faction play, and a bunch of new monsters and magic items.

For Falkrest Abbey I've decided to ask my friend Zaira Diana to draw the cover and interior art. Zaira, Andrea and I have already worked together on Guardians of Sol-Tau, and I'm very happy to have her again with us.

This is the cover art she's concocted for us: meet Grusom the cursed abbot. I love this piece! 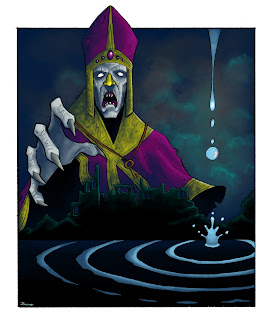 And since the Abbey is already written and playtested, Andrea and I are already at work on another adventure: The Mouth, based on the ideas from this post.
We're in the middle of fine-tuning everything, but most of what's in that post has found a place in the adventure, and can't wait to begin internal playtest!
We'll also probably offer a public playtest version in the next weeks on the official Old-School Essentials facebook group...

About Temple of 1000 Swords

Temple of 1000 Swords is a dungeon adventure for Old-School Essentials by Brad Kerr, the same author of Hideous Daylight. If you play OSE, go grab it now because it's so good I'm stunned. 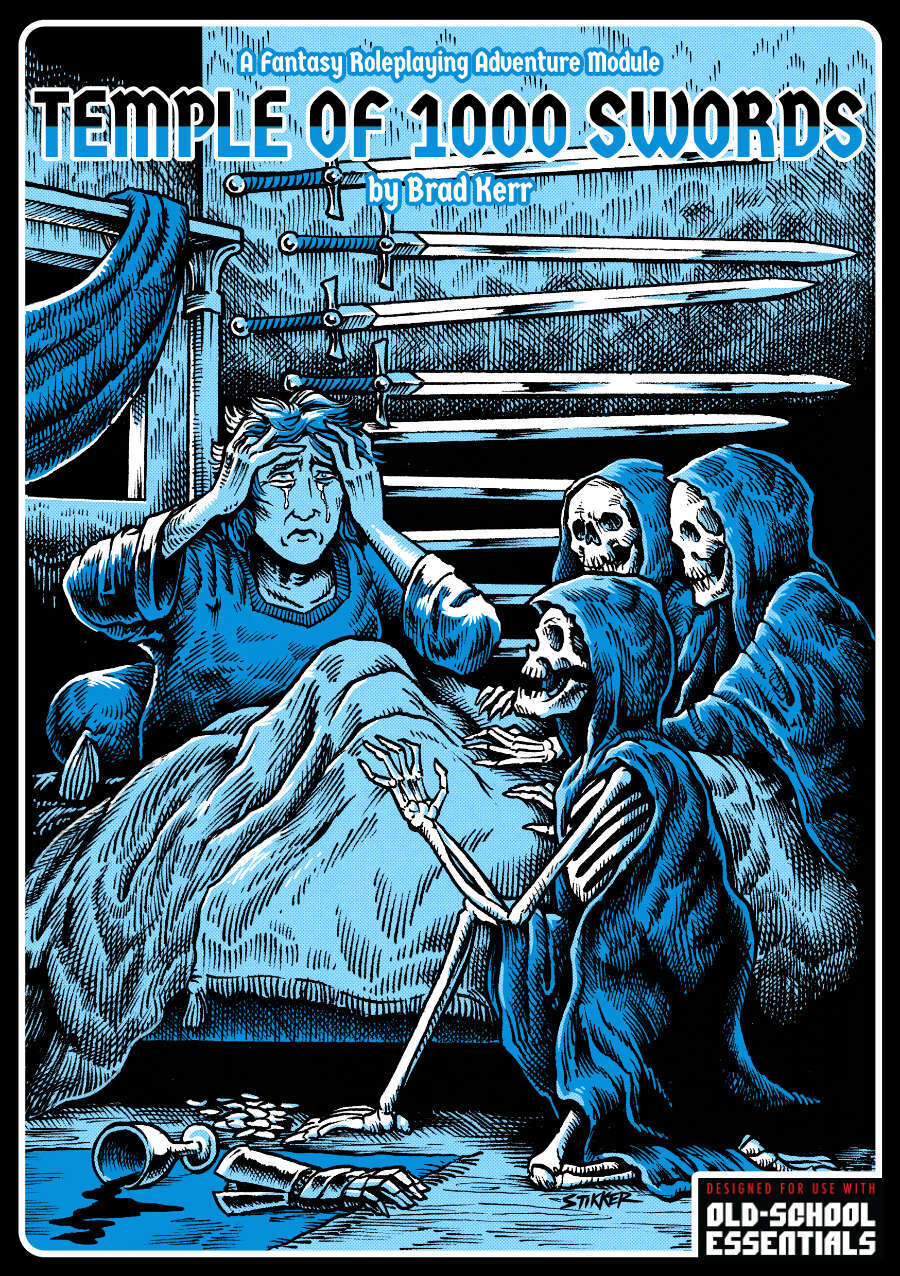 It is a 25 page adventure featuring a 19 rooms dungeon of intense fun. It is statted for Old-School Essentials so it's also ready to use with BX D&D and similar rulesets. It states being designed for "approximately level 3 characters", which probably means a level 2-4 range would be ok. I think level 5 characters would find it too easy, and with too little loot.

I bought the PDF and had it printed and stapled locally into a nice little black and white A5 booklet.

The writing is short and sweet and fully functional to run the adventure. Flawlessly structured and well laid out for easy running.

The temple of Gladio the forgotten sword god has interesting things going on in every single room, with situations that require problem solving, lateral thinking, one or two optional "regular" puzzles, a sort of moral dilemma, and even faction play. I think I couldn't ask for more!

You have Gladio's magical forge, capable of turning anything that is put on it into a sword-hybrid: a coin, a book, a torch, anything. And that's why one room contains crazed sword-persons...

The magic forge is also the source of the d100 table of peculiar swords that can be found scattered around the place among the piles of hundreds of swords that clutter all the rooms. These are made of stuff someone put on the forge to see the result. These include nonsense pieces such as the linen sword, papier-maché sword, and egg sword; some that are simply treasure such as swords made of silver, gold, rubies, mithral and dragon scales; some that are more conventional magic swords (light; masterwork; adamantine) and some very cool pieces such as a magically stretching sword, a functional blowgun sword, a rattlesnake sword, and my favorite: the intelligent, mustached, grandfatherly, +1 Grandfather sword (possibly a Diablo reference, and also meaning someone put their grandfather on the forge, which I find hilarious).

You have a legendary sword that is divided into nine pieces scattered in the various rooms, and one has been used to pin a vampire against a wall. You want to collect them all? You'll have to free the guy.

You have two factions battling for control of the place (treacherous merfolk and bloodthirsty duck people).

You also have a bunch of interesting hooks and and possible outcomes impacting the campaign outside the dungeon.

The only two little quibbles I have are that one of the secret passages is marked on the map but there are no real clues to motivate the players to look for one, and one NPC, Piotr, has no game statistics. That's because players are not supposed to kill him, evidently, but still, players being players, you never can tell...

Of course these are very small flaws, more like two bits I'll have to remember fixing before running it (can't wait!). Seriously, this is one of my all time favorite OSR adventures along with Black Wyrm of Brandonsford!

(And it's currently included in the Christmas in July sale!)