About Lands of Legends! 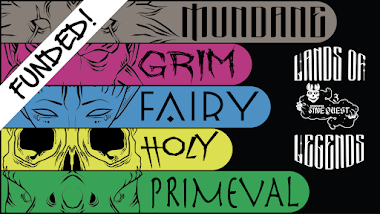 Lands of Legends is a series of five zines designed to assist you in both prepping and running hexcrawl, sandbox, open world campaigns with classic fantasy OSR games such as Old-School Essentials, Labyrinth Lord, Sword & Wizardry and the various simulacra of the Original, BECMI and B/X editions of the classic fantasy role-playing game.

It was successfully funded in February 2021 as part of ZineQuest3 on Kickstarter, with over 200 backers in two weeks.

Each zine contains 100 Special Areas and 100 Unique Encounters, with both categories sorted by terrain type (forests, mountains, cities, swamps and so on) and organized as d10 tables.

Special Areas are designed to help you create an engaging sandbox setting, where every mountain, swamp, island, forest, city, desert etc is unique and interesting.

Unique Encounters are designed to be used straight away while playing, and offer interesting and story-enhancing situations. No more boring random monsters! Have your group face unforeseen hazards, interesting NPCs, and puzzling situations during their travels!

Lands of Legends - Mundane focuses on the commonplace situations and everyday accidents, imbuing your campaign with the fresh breath of a living world! It suited for low magic settings, and can be used with just about anything you want to run.

Lands of Legends - Grim focuses on the darker, grittier nuances of fantasy games, and is the perfect fit for campaigns that explore grimdark, gothic, horror themes.

Lands of Legends - Fairy is the perfect book to enrich your campaign with the enchanted prodigies of the fae, bringing back the sense of wonder into the game, with magical places and events that are true to the spirit of the fairytales and folktales roots of the fantasy genre.

Lands of Legends - Holy makes the Gods -benevolent, whimsical, indifferent or cruel- an active power in your campaign world, along with their priests and prophets, crusaders and champions, and a whole lot of omens and portents to challenge your players.

Lands of Legends - Primeval is the tool to unleash the raw, prehuman, tumultuous forces of primeval civilizations and antediluvian elemental chaos into your campaign, enhancing a brutal Sword & Sorcery vibe!

Each volume is also available in a Print-on-Demand version:

Some Reviews:
"Whether your adventurers are traveling to civilizations, deserts, forests, fresh waters, jungles, mountains, hills, plains, valleys, seas, islands, swamps, marshes, or wastelands there’s plenty to find and experience among the Lands of Legends!" - Cannibal Halfling Gaming
"Lands of Legends – Mundane is plain and simple in appearance, but its content is anything but. For the Game Master wanting ideas or inspiration, there can be no denying that Lands of Legends – Mundane is rich in both. Plus the fact that it can do both inspire world building and encounters gives Lands of Legends – Mundane a pleasing versatility to both the inspiration and the ideas." - Reviews from R'lyeh
"Do you like random charts? Then these books are for you. These entries are unique and engaging" - Thac0 blog
"The sheer level of creativity that went into these zines is staggering. Beautifully designed and incredibly well-executed" - Welcome to the Deathtrap blog, reviewing Lands of Legends Mundane & Grim
"I have been amazed with just how much creativity goes into these zines; they always stun me. But this one has been a cut above. If you are looking for new locations, cool encounters, and want a divine twist on them, this will gave a few things you will want to steal." - Welcome to the Deathtrap blob, reviewing Lands of Legends Holy
"Incredible creativity. I have said this of the previous volumes of Lands of Legends, but I am again staggered by the level of creativity that has gone into the creation of Lands of Legends: Fairy." - Welcome to the Deathtrap blog, reviewing Lands of Legends Fairy
"If you like running sandboxes, hex crawls, or need some inspiration for the setting you are prepping, you really can't go wrong with Lands of Legend” - Tenkar's Tavern
Sounds good? Check it out on Drivethru!
at September 01, 2021
Email ThisBlogThis!Share to TwitterShare to FacebookShare to Pinterest
Labels: Crowdfunding, Dungeons & Dragons, Lands of Legends, Old School, Old School Essentials, OSR, ZineQuest3 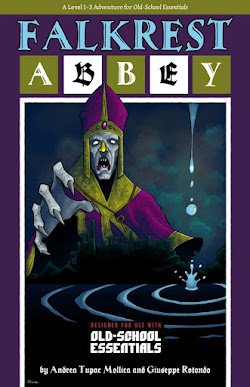