It was crowdfunded last February during Zine Month. I backed the project and the printed zine has just landed here at my place, all the way from Portland, US to Pisa, Italy! 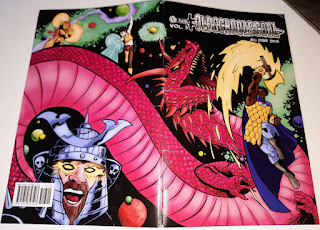 It came in a simple letter envelope, plus a protective plastic wrap. It came in good condition (except for a corner on the cover).

The zine is one of those US formats I can't fathom, similar to A5 but slightly narrower. It looks beautiful. Color cover, b/w interior, good staple binding and print quality, 40 pages of goodness, with clear layout and nice art. I especially like the full wrap-around cover art.

The objective of this zine is to give options and content for b/x d&d and its simulacra, Old-School Essentials included, to go beyond the 14th level limit.

This is achieved in the various sections of the zines: new options for classes, high level spells, immortal artifacts, monsters, gods who used to be adventurers, and the adventure "Don't Lose Your Head".

First of all, the zine introduces the concept of "level x": instead of coming up with tables upon tables of new level progression beyond level 14 (or lower, depending on class limits), the zine presents the idea that once a character has reached their class' maximum level, plus another xp threshold listed in the zine, they can reach "level x" if they defeat ("though not necessarily kill") a level x character.

Defeating another character is a very interesting concept (yes I know druids already had that) and one that makes progression more interesting than just an abstract, arbitrary xp goal.

Once both conditions are met (xp and victory over a level x character), the new level x hero must choose one of two paths: Ascended or Descended. These two may sound a bit like "good" and "evil" (which in turn is quite close to how the law/chaos opposition seems to map in b/x d&d), but it's not necessarily so. The two paths available to clerics are pretty much so, with one being the angelic healer, and the other an aspiring demigod of undeath. Things are definitely more nuanced for the two paths available to dwarves: the runesmith and the grudge keeper. I like that, as per the rules presented in the zine, the choice is free and not tied to alignment in any way, and that there is no neutral choice between, say, the path of the vigilante and the path of the crime lord for thieves, forcing players to an interesting ethical choice beyond their alignment. . This section, with two paths for each of the seven bx classes, is 10 pages.

Each level x path offers a packet of new class abilities (in most cases 4 or 5), plus of course access level x spells for spell caster classes.

The zine lists 8 arcane level x spells and 6 divine level x spells, described in 4 pages. These are of course very powerful (the arcane list includes a wish spell, for example). 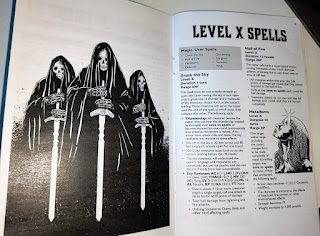 What I like about both the new class abilities and the new spells is that yes of course they are powerful (often extremely powerful), but also that they are not just and not only numerical bonuses, but often give new capabilities. Examples: an elf who's picked the path of the unseely fey can "command any animal, beast, or monster with 10 or fewer HD, so long as they are within a forest". That's one hell of a special skill, and the type of ability that truly changes the game, which is good, in my opinion. Another example: one of the level x divine spells completely restores an undead creature to life, as if death and undeath never happened to them. This, in a domain level play, can have a lot of consequences which can be interesting to explore and definitely may go beyond mere combat.

I like that these new powers, abilities and spells are clearly not mere conversions of stuff from other editions.

I don't like that here and there some rules are not 100% crystal clear in their meaning, or so they appear to me.

I can't be sure these powers and skills can work or will ruin the game with their immense power, but one thing is sure: before players gain those skills, they must defeat an NPC who possesses them, and it will definitely require some very clever planning and group work. Think for example of a grudge keeper dwarf: one their abilities says once they lose half their hp they "lose track of their dwarfmanity" (LOL) and until all enemies are dead they attack at -2 but roll 1d100 for damage! Go kill that guy, I dare you, this is what the zine says, and I like it. 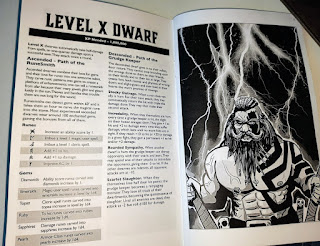 The "Immortal Artifacts" sections presents 22 (again, very powerful) magic items. These are cool and detailed with backstory, powers, and also a corrupting trait and some way to neutralize them. These are very cool and can definitely be introduced as treasure (and game changers, and of course as part of the arsenal of villainous NPCs,) into a high level campaign wether you choose to use the "level x" rules or not.

The monsters section includes ten creatures, such as Apocalypse Dragons, Devil Wyverns, Kaijus, Shoggots, and Ghost Cataphracts (a Ghost Rider inspired undead, complete with a "hellfire flail" that extends to 15'). They range from 12 to 33 HD and of course have very nasty special abilities. These are solid and interesting and, like the previous section, can surely be introduced as mega enemies for level 10+ parties. 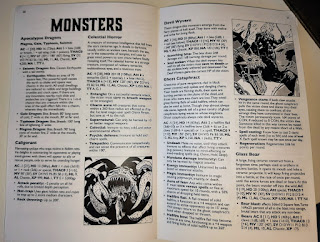 The "Gods who used to be adventurers" section (2 pages) briefly describes four godly NPCs, with brief background, game statistics, holy symbol, unique special abilities, and individual art pieces. These are frankly cool, and are connected with the other contents of the zine such as the artifact, but on the whole I'm not sure what's the deal here. Even though they have the six abilities scores listed, based on their statistics they don't seem to be level x characters, but their own thing, so what are they here for? Possible adversaries or allies, I suppose, but the intended purpose is not perfectly clear as it is not stated. 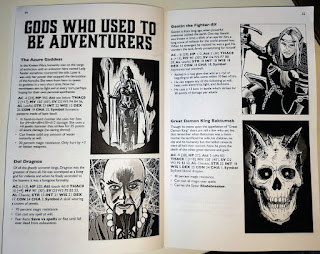 The final 4 pages feature a scenario for characters who "have enough experience to reach level x but need to defeat a level x champion. Characters of less power but great cunning could perhaps survive, but it would not be an easy task".

This is a short open scenario with a city threatened by an evil level x magic user, but also protected by a good level x fighter. It also features several creatures from the monsters section and a couple of items from the Immortal Artifacts section. It could have benefited from having one or two extra pages to make a few details clearer, but overall it seems to me a good example of high level play scenario, which is quite rare. It is an open scenario where clever thinking, diplomacy and political decisions may have a large impact and, while the default approach is to stop the evil magic user, the scenario will still work if the group decides to challenge the good fighter instead.

Overall the zine is very good, with lots of things that can be dropped into high level campaigns (10+), all together or in selected bits, and I'm glad I backed it! If it's ok to have ogres and trolls in scenarios for level 1-3 characters, then you can definitely put some of those mega monsters (and magic items, and spells) in a level 10-14 scenario. 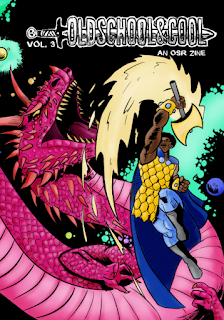 The print version (I suppose the same as mine), alone or with the PDF, is available at the Knight Owl Publishing store, while the pdf alone is up at DriveThruRPG.