Dragons for My Current Game: Xagoranth of the South

A few weeks ago I posted my adaptation notes (part 1 and part 2) to run Tomb of the Serpent Kings with Old-School Essentials.

The first post included a simple hex map I made so as to have a minimal "backdrop world" with the starting town of Fortana.

Of course one thing leads to another so I quickly added the modules I hoped to run after the Tomb: Brandonsford, renamed as Brandonia, and a village for Ominous Crypt of the Blood Moss.

And after that I added two dragons on the map... because why not? The implied setting in BX dungeons & dragons and Old-School Essentials is clearly has lots of them. And people in Fortana probably know about the two closest dragons.

So now? Time to roll their details with the tables in Deadly Dragons Dire & Daunting, the set of tables included in the Axian Library book to create unique dragons with their environment and context. 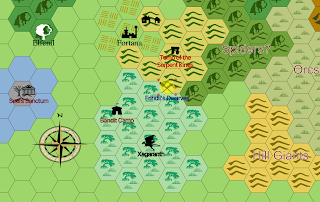 I've also added The Seers Sanctum, putting it on a not-so-pleasant islet in the middle of a lake.

Here's what I got for the dragon in the swamps south of Fortana:

Secret weakness: Music scares, irritates or disgusts the dragon, who must make a Morale check if confronted with it.

Motivations and Desires: Survival, greed, pride, paranoia (Halved chance of sleeping; -1 to THAC0 due to tiredness; both included above). Current desire: Wants another dragon dead. Of course, why not Korgathix?

Origin of the treasure: It is the accumulation of tributes of enslaved or defeated humanoid tribes. Obviously the dragon stole better part of Frindil's family treasure (see below).

Allies:  1 Cyclops, Oggamar
Ok this guy probably lives with the dragon.
Their treasure:
Allies:  30 Brigands, with their leader Fargan (level 2 fighter with plate mail, sword, lance).
Their camp is in the same hex as the dragon's lair. Fair weather friends.
Their treasure:
Enemies: 21 Dwarves, with their leader Frindil
They live in a mine in the hills north of the swamp. They moved to their current home about two years ago, and were attacked by the dragon who took a lot of their heirloom and slay half of their group. Of course they hate him and would gladly join an expedition to kill him (or at least recover their enchanted swords and armor).
I'll also consider these to be the cousins of the three dwarves in the Brandonsford scenario, because connections are good.
Their treasure:

Adventure Hooks:
Lair: A ruined temple in the swamp.
I'll set this as serpent-themed, to continue the theme of the Tomb of the Serpent Kings. Ah, I might as well add a map to the temple among the treasures of the tomb, with a secret passage by-passing the magic ward (see below).