Dragons for My Current Game: Korgathix of the North

A few weeks ago I posted my adaptation notes (part 1 and part 2) to run Tomb of the Serpent Kings with Old-School Essentials.

My players have started delving the tomb despite one player was missing (and that means he'll roll on Mysteriously Missing & Merrily Met!). The've explored most of the false tomb and upper tomb, with a lot of luck and careful exploration, but not so much treasure so far...

So, the first of those two posts included a simple hex map I made so as to have a minimal "backdrop world" with the starting town of Fortana.

Of course one thing leads to another so I quickly added the modules I hope to run after the Tomb: Brandonsford, renamed as Brandonia, and a village for Ominous Crypt of the Blood Moss.

And after that I added two dragons on the map... because why not? The implied setting in BX dungeons & dragons and Old-School Essentials clearly has lots of them. And people in Fortana probably know about the two closest dragons.

So now? Time to roll their details with the tables in Deadly Dragons Dire & Daunting, the set of tables included in the Axian Library book to create unique dragons with their environment and context.

Here's what I got for the dragon in the mountains north of Fortana, and something you may find useful as a "dragon situation" for your games

Korgathix "Hellmouth", "The Swallower of Giants"

Breath weapon: 90’ long cone of fire. Strong Breath: Can use his breath attack up to four times per day.

Secret weakness: Sleeps a lot. +20% chance of sleeping (included below).

Large Maw: The dragon’s maw is larger than usual. and capable of swallowing a human-sized victim. An attack roll of 19 or 20 with its bite attack indicates a victim is swallowed. Inside the dragon’s belly: suffer damage equal to its bite per round (until the dragon dies); may attack with sharp weapons at –4 to hit; body digested in 6 turns after death. If the dragon uses its breath attack, the swallowed victim is expelled.

Origin of the treasure: It was a giant king’s treasure.

Allies: 20 Troglodytes
They live in a cave complex below the entrance of the dragon's lair, and act as guards, but are not allowed to enter his lair.
Their treasure:
Enemies: 3 Treants
These are the few treants that survived the dragon's fire, and of course they hate him. They live in a small ancient wood south of the dragon's lair.
Their treasure as rolled with the online generator:
But I don't like it. Why would treants have coins? So I change it with a single jewel of equivalent value:
Adventure Hooks:
Lair: A natural cave that is hard to reach without flying, or good climbing tools (4d6 falling damage). Whenever Korgathix sleeps or leaves the lair, he
....
So here's the updated map, expanded with a few more details as I slowly build the region. I've added "rumors" of more monsters around, and an elven community west of Fortana, just so we know where elf PCs come from. 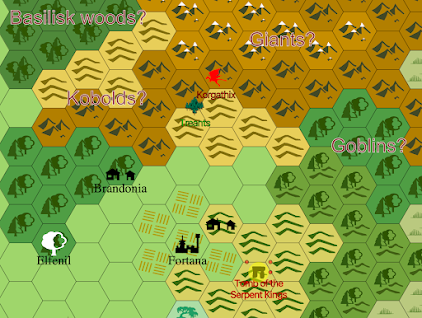