You are a dinosaur. You are a Kosmo Ranger. You are a Kosmosaur—a protector of the galaxy. You and your companions travel through the stars to help all sorts of people, planets, and organizations by preventing disasters, battling assassin robots, banishing chaos mutants from the Void Dimension, and facing all kinds of weird dangers. [From the blurb] 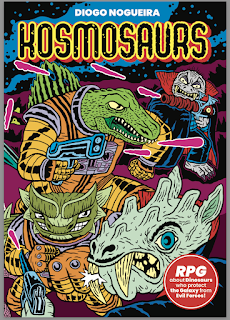 Kosmosaurs is Diogo Nogueira's latest rpg.
If you don't know him, he's the author of several acclaimed games, including the Ennie-award winning OSE adventure Halls of the Blood King and big hits such as Sharp Swords & Sinister Spells, Solar Blades & Cosmic Spells, Dark Streets & Darker Secrets, and Lost in the Fantasy World.

A few months ago Diogo asked on his socials for bloggers etc to check and review his upcoming game, so here I am. I received the work-in-progress pdf and had the opportunity to check it. Now the game is available both on Diogo's itch.io page and on DriveThruRPG.

It is inspired by Saturday morning cartoon shows and as such is a perfect game to play with younger players. The characters are Kosmosaurs, i.e. dinosaur space rangers and protectors of the galaxy. While it is not stated explicitly in the game, it's very well suited for children. That doesn't mean you can't have fun with it even with a group of adults, of course. 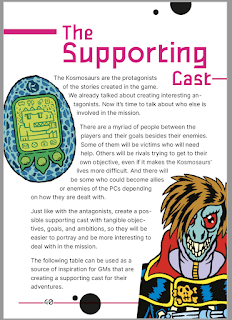 Let's see how the game works.

The core mechanic is inspired by John Harper's new classic Lasers & Feelings. Kosmosaurs only have two numerical statistics: Kosmo and Saurs, which represent intellectual and physical capabilities, respectively. When you create your character, you divide 5 points among these two stats, and that's the pool of d6s you roll when you make an attribute test. Characters are further defined by the type of dinosaur they are, of course (a pterosaur can fly, for example; an a ankylosaur can bash things with its tail, and so on), and they must also choose a role (pilot, scientist, xenologist, commando, etc), and two extra things the kosmosaur is good at and one thing they are bad at. Furthermore, each character can choose a number of significant items equal to their Saur score, and a number of knowledges equal to their Kosmo score. That's it for characters.

You roll your Kosmo or Saur pool of d6s, and add an extra die if the action is typical of your role, if that's something you're good at, or if one of your significant items or knowledges applies to the situation.

Things you are bad at, and stuff that your role would be bad at, reduce the die pool by one. Same goes for difficult actions, which is determined by the GM.

So you roll your pool and take the die with the highest result.

Results have five degrees of success and failure which can be described as:  No, and / No, but / Yes, but / Yes / Yes, and. These are not the terms used in the game, but I guess most of my readers get this type of thing. The game explains the results fairly clearly.

The rules are player facing, meaning the GM never rolls. Combat is quick with players rolling to attack and to avoid damage. Damage is handled as markings on your Kosmo or Saur scores, and the default rules dictate that characters don't die: they are just taken out for the scene, as appropriate for Saturday morning shows. Players also have the option of (temporarily) losing a meaningful item instead of taking Saur damage (which can be later repaired or replaced), or one of their knowledges instead of Kosmo damage (representing temporary self-doubt).

The "combat" rules apply to any type of conflict really, so Kosmo damage can represent the outcome of a failed social conflict.

Beside their characters, the players get to create the group's spaceship, which is handled with similar stats as the Kosmosaurs.

This is pretty much all there is to it as regards rules. I didn't go into the details of the consequences of damage but I think you get the idea. 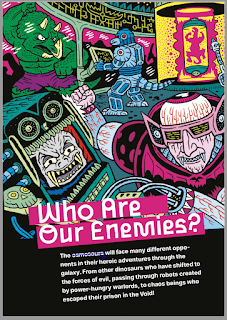 What I've found especially good is the large set of tables that accompany each section of the game: types of dinosaurs, roles and names, for players, and then a whole lot of tables for the GM: mission objective, antagonists, locations, supporting cast, complications and rewards are the tables you get to help you quickly set up a scenario. All of these are d66 tables, which means there are 36 results, a reasonable number for the scope of the game, and also a way to have tables with many entries in a game that only uses d6s.

The book also contains a series of five detailed enemy factions, a sort of recurring villain organizations that help define the setting. They are: the Robot Empire, the Voidsaurs, the Undead (space) Pirates, the Slime Lords, and the Broccoloids. Each has a fun general description, a list of associated themes, and two d6 tables: one with what they want, and one with what they are doing. The first is more of a possible long-term objective which can be the subject of an adventure or even a series of adventures, while the second can fuel a scene or a single scenario. 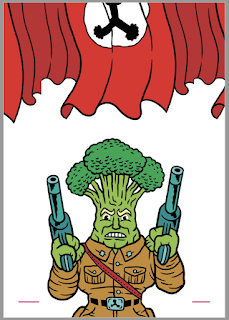 The final pages of the book are the colorful character sheet and space ship sheet.

Is this game for you?

I think there are two possible ways of playing this.

One way is to play with a group of kids of any age as soon as they can read and write a bit. Rolling a bunch of d6s is something children can do long before they can read, and the game requires zero math skills, but they need to be able to write a few things on their character sheet... unless you write stuff for them.

As a game for adults, it certainly is a great choice for a light-hearted game night for players who enjoy the joyful silliness of Power Rangers and similar shows.

What I find very good is that:

- the rules match very well the spirit of the "source material", with heroes that don't die, simple action, and no simulation or realism whatsoever;

-the same goes for the fabulous art which is colorful, full of action, and fun with a lot of goofy details and over the top characters;

-considering the two types of gaming groups I see this for, the suite of player and GM tables are very helpful and definitely help to get quickly into the game. You want all the help you can get to run a game for kids who are absolute beginners, and it's also good to have tables to quickly set up a scenario for them (or for adults, of course). 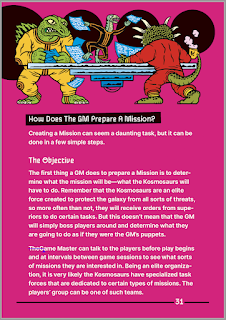 - The game has the potential to be a very good introduction to RPGs both for kids AND for parents who have never played rpgs before, so I've especially appreciated the few pages devoted to explaining how the game flows, and what are the task and responsibilities of the players and the GM. These include the who does what in game terms, but also some advice on the social aspects of the game. These recommendations may seem obvious to experienced role-players, but I think they are very precious for beginners.

So, yes, Kosmosaur seems like a great game. Frankly, I hope some Italian publisher will localize it. I see it as a perfect game for me to play with my 7yo, and as a gift I could give to my gaming friends who have children of similar age!

So yes I think you should definitely check it out!