Andrea Sfiligoi is a man of many talents: designer of miniature games, RPGs and solo games; fiction writer, illustrator, translator, and also publisher, with his Ganesha Games brand, of his games as well as other authors’.

One feature I love of his miniatures games is that they are generally simple and accessible, and can be played with any minis you have around.

His games include the acclaimed Songs of Blades and Heroes skirmish/war game, the astoundingly successful Four Against Darkness game line, and also my favorite skirmish game Battlesworn.

He’s also recently tried his hand at children's books with the recently published What To Do When Mr. Blue comes to Town, which he created together with his wife Anna. 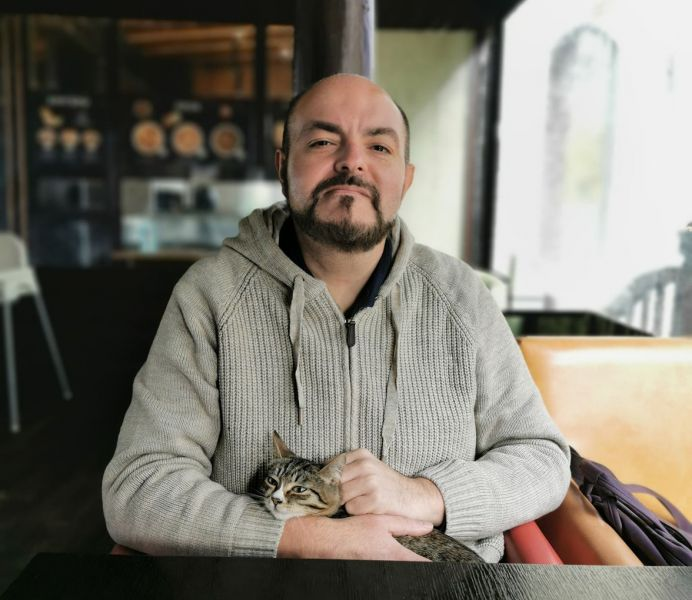 But who is Andrea? I’ve known Andrea personally for about 10 years now, as we’ve met in several gaming cons in Italy, and I’ve known him as a designer since the ‘90s, when I was a teenager reading gaming magazines, and he was just starting his career as a game designer writing gaming articles and adventures on those magazines.

He is a gentle man, and a vegetarian and cat lover; a gaming enthusiast in the broadest sense of the word, always happy to share ideas, collaborate, or just discuss gaming.

He moved to Kharkiv, Ukraine a couple years ago, and he got married last summer!

Ok, so let's start with the questions!

1 Hello Andrea. Let’s talk about your work as a designer and publisher. How did you start? What was the first game you released? Have you ever tried working for other publishers, or has self-publishing always been your only preference?

My first self-pub game was Song of Blades and Heroes in 2007, which actually was designed as a short filler between games of DBA. But many years before that, I wrote and illustrated a supplement about demons called Inferno for the French rpg Simulacres, which was published in Italy by Nexus, and I wrote several articles for GURPS on Steve Jackson Games’ Roleplayer and Pyramid Magazine.

After my first few games were successful, I was contacted by Osprey and wrote three titles for them: “Of Gods and Mortals”, “A Fistful of Kung Fu” (which got nominated at Origins) and “Rogue Stars”. 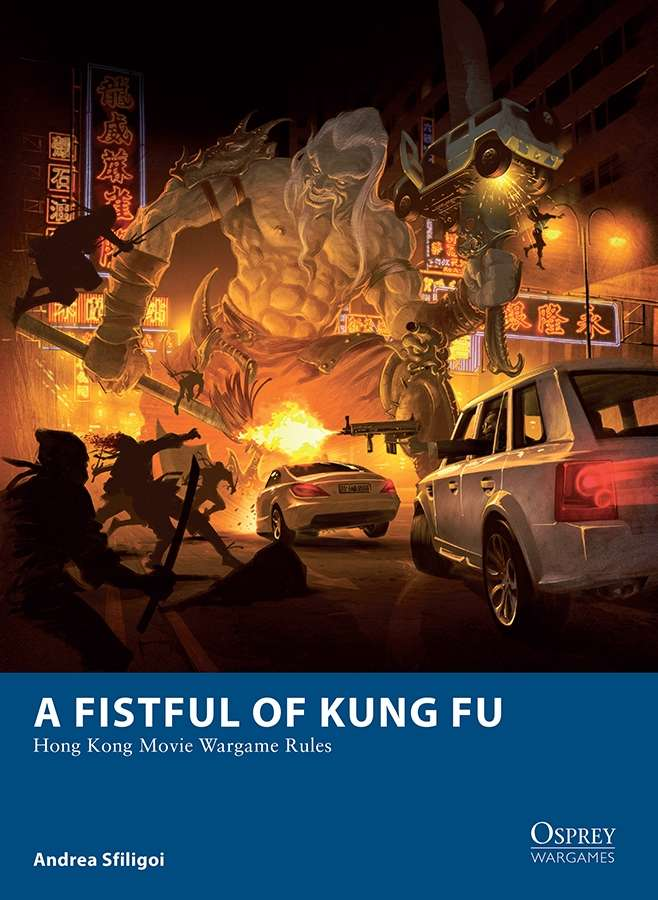 2 We can say Song of Blades and Heroes is your biggest hit among your miniatures games, with dozens of supplements derived rulesets. Why do you think it has been so successful?

I guess it was the first miniature-agnostic system that became very popular because it was published at the right moment, and because it tried to solve the many little obstacles that people have when playing miniature games.

What have you learnt about design since its release?

I think I didn’t really learn anything major – I fly by the seat of my pants and just use my intuition. I just try to design games that I would like to play. I am lucky that there are many gamers with exactly the same taste. And what about publishing?

Oh I learnt about formats, distribution, and how to save money. The most likely mistake that a new publisher can make is to spend too much money. This business is small and you need to watch your dollars.

(Bonus question: How many miniatures have you got?)

Painted? I think about 5000. Unpainted: better not ask.

3 You told me Four Against Darkness is, by far, your best selling game, with several thousand copies sold, lots of expansions and spin-offs, and a bunch of localizations. What has been the key to such a glaring success, in your opinion?

It’s a solo game that puts together some of my favorite games: the simplicity of Tunnels & Trolls, the collectability of Fighting Fantasy, and a simplified version of the Red Box. 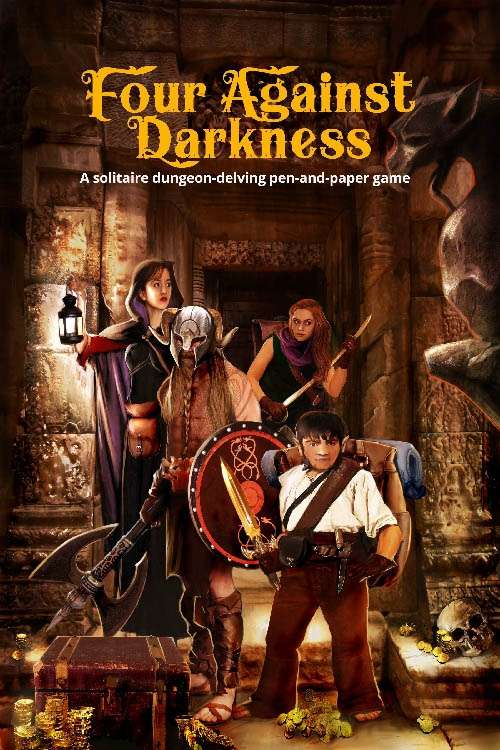 4 What’s your advice for aspiring or beginning designers and self-publishers?

Read and play what has been done before!

5 Kickstarter, and crowdfunding in general, has become more and more important for tabletop games. What has your experience been with the crowdfunding campaigns you ran in the past?

We used crowdfunding when we needed to produce expensive stuff like miniatures, but probably I am not going to use the platform anymore. It’s too crowded, too easy to make financial mistakes, and, for books, I really don’t need it. I just write, illustrate and publish.

6 Do you see the whole crowdfunding scene changing anytime soon? How would YOU like things to change?

I don’t have any special ideas about crowdfunding. I continue to support original, grassroots ideas as a backer, and I hope this will continue. I would like a new platform that worked together with paypal and filtered out big companies, but I understand this is not going to happen because money talks…

7 I know you are always working on more and more games. What can you tell us about your future gaming releases?

4AD will be released in many different languages, thanks to the excellent work of MS Edizioni in Italy that acts as my agent for international rights. This takes a bit of my time. 2022 will see both new releases and new editions of old titles. For sure there will be a new revised “all in one book” edition of Song of Blades and Heroes, and we have no less than 25 books for 4AD in the pipeline.

8 As your online shop shows, you are very open to collaborations. Should anyone reading this interview be interested in working with you on any of your games, what should they do? Are you currently interested in content writers, illustrators, designers, playtesters?

Playtesters always. Illustrators no (I do art myself to keep the costs down). We have so many games in different stages of production that any proposal will have to wait for a long time, but we do accept new writers now and then. The best thing is to study what we do and send me a short synopsis (DO NOT WRITE THE WHOLE THING!) and email it at andreasfiligoi@gmail.com .

9 “What To Do When Mr. Blue comes to Town” is a completely new type of thing for you. How have you come to this? Are you planning more children books? I studied children’s illustration and book production and I have been somewhat active in this area, occasionally painting illustrations for other writers. My wife has plenty of fresh ideas and is learning illustration so we just decided to try something together. She writes a story, I edit it, she paints some illustrations in gouache that later I refine digitally, then I do layout and we send the whole thing to an external editor. We want to produce a catalog of about 10 picture books and a game-book for children and see how they sell. We want to diversify and try different niches.

If I knew I would write games for the future :-) I think the current trends will continue, and 3d printing will be a powerful factor that should be considered even in rules design. For example, I think of games allowing players to print their own equipment upgrades to their figures.

11 I know, they were supposed to be 10, but I have one more question before we say goodbye. Please point us to a song you think we should listen to.

I like songs that tell a story. For people who love cats, “In Dreams of Mine” by Faith and the Muse is just perfect.

Thank you Andrea! Hope to see you again soon at some gaming con!

at January 27, 2022
Email ThisBlogThis!Share to TwitterShare to FacebookShare to Pinterest
Labels: 10 Questions to, Crowdfunding, Four Against Darkness, Miniatures, Solo