Tony Vasinda is a very active voice in the indie RPG community, and the founder of Plus One Experience, which “multiclasses in Beard & Skincare Alchemy, Game Design, & the Bardic Knowledge of Content Creation”.

He's one of the main voices in the RPG zines scene, networking and encouraging creators to make great stuff. You might have heard of him with regards to the Repugnant project during ZineQuest3, for example. And his enthusiasm certainly encouraged me with my Lands of Legends project!

He is currently crowdfunding Down We Go Infinite Edition, by Markus Linderum, on Gamefound.

He’s got an amazing beard, as you can imagine (and he's also written a game about that!), and he’s also a catholic missionary. Plenty to talk about here! 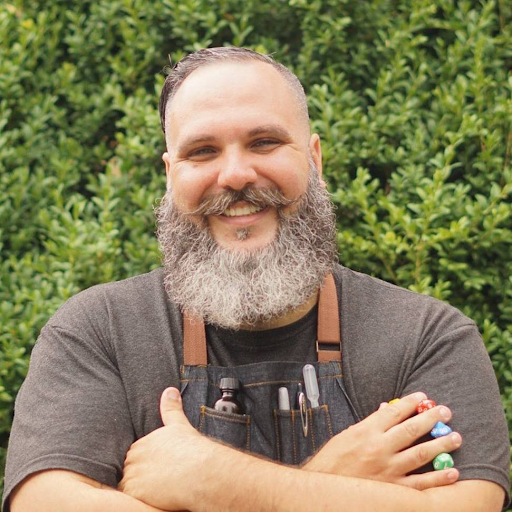 1 Hello Tony. First of all, tell us everything about Plus One Experience, from games to beards, as if you were trying to explain it to my aunt!
Hello auntie, I make beard balm (like a leave-in conditioner for beards) for a living and love sharing it with specific groups. So I made some that were RPG inspired because it’s something I love. As part of that I made a beard RPG called Beards & Beyond and started helping review and promote other folks' games on youtube. Folks love the balms, and the games, but most folks know us for reviewing other peoples games and promoting community conversations in the Indie RPG space.

2 Let’s talk about Down We Go. How did it become a fully fledged KS multiple-contributors crowdfunding project from when it was a one page game? Are you the one to blame?

Yeah, it’s my fault. I saw a beautiful 1 page game that Markus Linderum made and asked him to run it on stream. He did and created some simple 1 page dungeons to go with it. I loved them and asked if he could make a city so we could print the game as a small zine. We kept playing the game on streams anytime we had an OSR module to feature and I and other folks fell in love with it.
So I worked with Markus to build a team, flesh out the content, and fill in the blanks on the project. 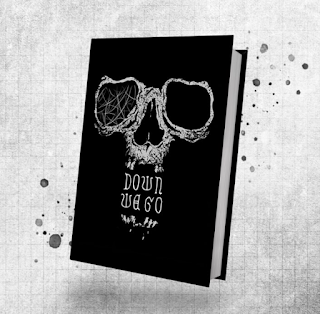 3 Can you tell us more about the game as it is now?

So the core rules are still just 1 A5 page. We fleshed out the Ref (what we call game masters) page a bit, and built some simple procedures for helping folks make their own Dungeons. Currently we are playtesting our Faction, Event, Location, and Hexcrawl procedures that are getting added to the game. So the core rules fit on that 1 page, but you have a 10 more pages of option procedures to help the Ref have everything they need to run a session or a campaign with very low prep. The rest of the book is made up of and other support material for each of those procedures. The Dungeon section has 1 page of procedures and then 4 Dungeons. The Faction section has 1 page procedures and 10 Factions. Think of it as a toolkit that has everything you need in it to run an amazing game, but that you can ignore if it’s not a part of how you want to play.

4 Obvious question: why not Kickstarter? Why Gamefound?

Great question. In short it’s because we need to end the stranglehold Kickstarter has on the way we think about crowdfunding.

Kickstarter isn’t bad. I plan to use it for another project coming up. However, just having 1 good option for any process is never ideal.
Competition breeds innovation and the funding process needs lots of innovation to be healthier.
Kickstarter has a better reach and footprint, but I think Gamefound has a better toolkit for marketing and building the page you want to build. We are probably leaving money on the table by choosing Gamefound right now, but we can always sell more games. What we don’t always have the choice to do is to make a choice that improves the RPG scene for others. We chose Gamefound because I wanted to open the space up more for others who want to fund their games theer and prove small projects could thrive on the platform.

I have been thoroughly impressed by Gamefound and the team. I can’t wait to finish the campaign and smoothly integrate their pledge manager into our process.

5 Down We Go is the perfect example of what crowdfunding was originally designed for. Through the years, though, it has become more and more important even for the “big players” in the RPG industry.

Do you consider that unfair? Or is the presence of big publishers beneficial to the small ones? Do you see that changing anytime soon? How would YOU like things to change?

Look this may not be popular, but I love seeing bigger companies funding on the platform. There are two reasons:
1. It 100% brings people to the platform.
2. Producing games and printing books is a huge risk. WotC does not have to worry about a book not selling. Almost every single other publisher does.
A bad run at scale would ruin most publishers, or at least mean layoffs. I want us all to succeed, and believe it or not, I think we all can.
Competition breeds innovation, but it has to be healthy competition. We created Down We Go as a unitive game with a global team because I think the best thing we can do is be united as a community of players & designers. It’s the only type of success I am interested in. There will be bad actors who out themselves over time, and we need to be on the lookout for that, but not at the cost of our own dignity or mental health.
I work with publishers of all sizes who are interested in building up our community and speak out against those who act in self interest. That’s what I care about.

6 Inclusion and representation of minorities in RPGs are a hot topic. Considering the theme and size of it, I don’t expect Down We Go to address much of that within the game, am I wrong?

Great question. I don’t know because it’s a complex issue.
Down we go is about a dungeon crawling in and around a twisting dark hungry city that depends on the sacrifice of delvers to keep its economy operating.  We don’t have Races in the game, but we have had plenty of folks play different races, in our upcoming space hack Through the Void, I use Backgrounds that play a similar role.
Markus & I have never sat down and had a conversation about this, but from my perspective there are huge conversations about class, race, upward mobility, politics, religion that I expect every session to be able to touch on. For me games are about exploring the human experience in community with others. I think every designer needs to ask themselves, “Does this game encourage the players to have real conversations about moral, social, and political issues that humanize others?”
I think the answer should always be, “Yes”.
We built a diverse team so that these ideals would be baked into the game's DNA. I have never asked a single person on the team to make “inclusive content” because we picked a team who I never imagined would do anything else.
I really hope folks explore these issues when playing Down We Go. I hope they overthrow fascist bosses, and explore the injustice of unlimited wealth. However if they just go get weird mud for the Dirt Licker faction and fight a bunch of oozing slimes on the way, I want to hear about that also.

7 Let’s talk about other games now. What is the best game you’ve played in, say, the last two years?

8 Let’s talk about you as a catholic missionary. What does it mean, and do you put RPGs into that? Also a bit of a complex thing. In short, everything.

Let me start by stating I know tons of folks reading this might have some kind of religious trauma and that the Catholic Church might be the cause of that. Be kind to yourself if you need to stop reading here or skip this question. To make this easy I have asked to have the next section of my text spoilered so that you need to highlight it to read.

All the choices I make are guided by 38 years of being nurtured, fed, questioned, and challenged by my Catholic lens and imagination. I believe there is a God that exists outside of time who is love, goodness, and truth and from whom those things flow. I believe that He (and let’s acknowledge that pronouns fail to encapsulate a transcendent being) desires to be in a relationship with us. I also believe that I eat the flesh and drink the blood of this undying God every Sunday as a way to be in communion with him. Objectively, that’s pretty weird.
That impacts everything I do because, if someone says they believe these things and does not let it impact them totally... why believe it?
Here is a major thing though. What I believe is not what you believe. I don’t hold anyone besides other Catholics to believe what I believe, and the main group of folks I tend to disagree with are... other Catholics.

For folks who are not Catholic all I want to do is to amplify what is most good and true and beautiful in your life. For most folks in the games community that means sitting down and playing amazing games, listening to others, but lots of times it means having real conversations and advocating for those in need. Lots of the time it means pushing back against toxic and harmful elements in the community.
Plus One is a diversity first channel and company. This means that we prioritize LGBTQ, PoC, and minority voices on stream and when choosing who to hire or support financially. A huge part of this comes from my faith, but I don’t promote this on channel because I understand the trauma that many folks have experienced around religion and I always put the needs of the person in front of me first.

Like Jesus, I am here to comfort the afflicted, but to afflict the comforted.

9 You’re not new to it, nevertheless I think I can say “KS Crowdfunding days are crazy days”. How are you coping?

Pretty fine. Gamefound actually makes running a campaign much easier in the middle. I am able to set up a number of items in advance that I normally have to manually schedule in which means I don’t have to look at the page if I don’t want to and everything runs really smoothly. I am playing more and doing a lot of press, but that’s the fun part.

10 Please point us to a song you think we should listen to to get the feeling for Down We Go!

There is no better song to listen to than the Infected Tomb on the Down We Go Dungeon Synth album that you can get as part of the project. Loot the Body did an amazing job with it, and you can find it on the campaign page or right here.

Thank you Tony for your time, and best luck with Down We Go!

So folks, check out with Down We Go on Gamefound!

And stay tuned for more interviews!

Hit me on the Axian Spice Facebook page, on Twitter or even on Telegram to never miss one! Hit the comments if you want me to interview your favorite author, artist, or publisher!

If you want to support this blog, check my OSR and Savage Worlds stuff, or simply shop on DriveTrhuRPG (affiliate link).