Their campaign and project intrigued me because of several unusual features, so let’s get to know them and what’s going on!

1 Hello Kel. First of all, please introduce yourselves and tell us all you want about you, don’t be afraid to go personal!

Hi, I’m a nonbinary creator who started playing D&D about a year before the pandemic hit, I wanted to keep playing so swapped to online which is when i made Awfully Queer Heroes and gathered the team together. We were playing some homebrew and some official but was struck with how little LGBTQIA+ representation there was. I started to make my own and everything snowballed from there.

2 Ok, now tell us about the Tower of the Soul. What is the structure of the book? Does it contain fully mapped levels, or is it something else? How does it manage to be a level 1 to 20 campaign location in less than 150 pages?

Everything in the tower is randomised through tables. The levels have a couple of pre-set rooms (so no one floor only has 1 room on a bad roll) which the number of is decided with a dice roll, then what those rooms are are rolled as well. So if you have 5 rooms, you would then roll against the ‘room table’ 5 times to see whats inside.

Every single room will have its own encounter, though that doesn’t always mean a battle. There is an entire encounter section where it could be a magic effect, riddle, traps, battle, healing or a combination of the above.

There are two towns and a set of ruins to explore if the characters want a change of scenery or if they haven’t leveled up enough to take on the floor boss.

Laying the book out in this manner has enabled me to keep the page count lower along with printing and shipping costs which I try to ensure are as low as possible for the backers. 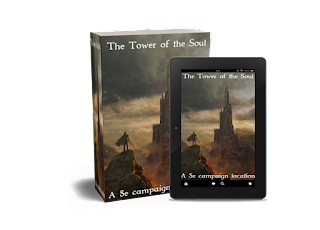 3 What’s up with Chaos? The Tower is a “chaotic characters only” campaign? Why did you choose this approach?

Everyone has seen and done from the ‘good’ side. Even if it's a Murder Hobo campaign, everyone around is generally considered to be good. There are always two sides though and I was wondering how those monsters and beasts felt at constantly being hunted down. This is the result of that.

4 Now on to the “new LGBTQIA+ content”. The KS page doesn’t reveal much about that. Tell us more!

Absolutely, There are spells, all the NPCs are LGBTQIA+, i have flags in pretty much all the buildings (i think it's all but say pretty much in case i missed one), all the races have a specific sexuality or gender listed. I even have a Nonbinary version of Incubus & Succubus.

For example one NPC is:

Sojaar, Owner of the Crown’s Lodge: The jewel of Zah’go, a living testament that wealth and fineries are nothing in front of a charismatic smile and a proper compliment. So, imagine what an individual can do with both. They are a flamboyant Tabaxi, who manages to have everyone’s smile and gazes in this lawless town.

Backstory: Few people know of Sojaar’s story, and even fewer are alive to tell it. They were a noble in a faraway desert land, who had to flee to escape the dangers of court. The road led them to the Zah’go, where money and a well-placed smile led them to become the owner of the most glamorous establishment of the land.

And here's a Race description:

Beautiful, striking, fierce, such are the descriptors of these winged horned creatures. Their divine origin is tied to both discipline and intense dedication in the pursuit of the culprit of a nefarious affair. Usually, such culprits are mortal men who have transgressed a sacred deed, or inflicted unearned pain onto others using foul means to achieve even fouler ends. Erinyes are disciplined warriors, bringers of swift death or the most exquisite of pain from the skies, ensnaring their foes and inflicting divine carnage.

5 Now about rules. Tower of the Soul features several rules add-ons and options. What are they? Are they tied to the chaos theme and the  LGBTQIA+ content?

The LGBTQIA+ content is there and just weaved into everything i could possible consider.

The Rules are a variety of things that initially came around due to things that irked me in official rules or that honestly i just thought would be really cool. However, all of them work really well within the Chaos setting.

One player having to merge with an elemental for every level of the tower before being able to take on the boss is huge and so much fun. There is another reason though and… SPOILERS……….. At the end, players have a chance to go onto another Tower. If they do a God will appear and merge them into a Hydra. Each player will control one Hydra head in the ensuing battle and the heads breath attack will be the same element that they merged with during the campaign.

That was a pretty tough thing to follow but thankfully it was also the last part of the book that i had intended to write.

Other rules include the new healing rules which are based on the level of comfort that you sleep in which is tied to how much HP you recover nightly. It changes how you play the sessions as some folk prefer to save their spells slots for extra healing or take more down time to recover.

6 A delicate question about the KS project and communication. Stating “LGBTQIA+ content” straight into the project subtitle isn’t something one does without thought. You sure know and have considered the whole range of different perceptions such a statement would get from all the different corners of the TTRPG audience. So, what were your considerations?

I wish we lived in a world where such a statement would not be needed at all, i.e. no product would need to be labelled as queer friendly, basically because implies the existance of queer unfriendly games which, unfortunately, we all know are out there.

My primary consideration is always, do LGBTQIA+ folk feel seen, represented, can they play as themselves etc. Many other places that answer is NO. I don’t want there to be ANY doubt that this is Queer made and Queer aimed. Of course non queer folk can back and play, they can even change things if they’d like. I have no problems with any of that. I made it to start to try and show that we are normal, we are here and we can be at your table without it being a big deal.

That's why nothing in my campaigns is SCREAMING gay. It's just there. The bartender is Pansexual, the mage is a male gay Orc. it's just included as part of everything else because it's just one part of us.

7 Tell us more about those nice add-on medallions please!

The purpose of these is three fold. Within the Tower, at the end of most levels, you get rewards for beating the boss. The medallions are part of that. They unlock certain rooms and training options to enhance your character. If the medallion is not on your character when you try and enter these locations, they won’t get in.

I wanted the players to have a physical representation of that in the first instance. They’re a D2 so can absolutely be used for D2 rolls or a yes/no, 1/20 roll of any kind. Lastly, I have adhd and need to fidget with things and I loved spinning them around constantly so figured other folks might as well.

8 Care to tell us about your live plays too?

At the moment, the Live Plays are on our Podcast. We have a twitch stream in the works but that is a couple of months off yet.

9 Let’s dream big. Tower of the Soul - The Movie becomes a thing! Can you pitch it to us? You are in charge with the casting, with an endless budget. Who’s in?

The director and assistant director i’d have as Patty Jenkins and Amanda Tapping as i love both of their works.

The player team i’d have (oh wow this is hard!) Alicia Vikander Martin Freeman Kristen Stewart Cate Blanchett Kate Mckinnon For the Gods (as i have 2 fully written out with images n everything) Rujun would have to be Tom Hardy Aharis would be Salma Hayek

I’m glad I have a great day job lol. It's hard at times for sure, right now it's super busy after launch, and I’m trying to keep up with all the questions while also trying to spread the word.  Honestly, one of the best things that could happen to me is if someone can’t back the project for whatever reason, they can still share it.  Boosting the signal would be the biggest favor for me.  Every once in a while imposter syndrome kicks in when I don’t get as many backers as I hope, but it’s a campaign, and it has already funded so will still reach as many people as possible.  I honestly think its absolutely awesome and it’s a really fun campaign! I don’t want that to get overshadowed by the diversity part of it.

11 The extra question. Please point us to a song you think would be a cool soundtrack for Tower of the Soul!

I was actually going to commission a soundtrack for the whole campaign but I ran out of time.
There are a couple, mainly from From Software games. The Bloodborne soundtrack goes really well with this as well as the Dark Souls 3 album. Its a fairly dark and twisted location while being something that is yours and you love and would defend with everything you have. Anything along those lines works wonderfully I feel.

Thank you Kelly for your time, and best luck with Tower of the Soul!

Hope you liked this interview. Stay tuned for more!

Hit me on the Axian Spice Facebook page, on Twitter or even on Telegram to never miss one! Hit the comments if you want me to interview your favorite author, artist, publisher or other RPG-related person!

If you want to support this blog, check my OSR and Savage Worlds stuff, or simply shop on DriveTrhuRPG (affiliate link).

at October 09, 2021
Email ThisBlogThis!Share to TwitterShare to FacebookShare to Pinterest