Fighters & Warlords is one of the latest SWAG-licensed products for Savage Worlds Adventure Edition, designed by Cyril Ronseaux, it continues his series of fantasy supplements which includes Wizards & Mystics, Bards & Minstrels, Companions & Familiars, and Tomes & Prayers. Cyril's works all share the same approach: each offers a variety of optional rules, functioning as add-ons.

The focus of Fighters & Warlords is combat, both ranged and melee. The book (53 pages) is packed with options. 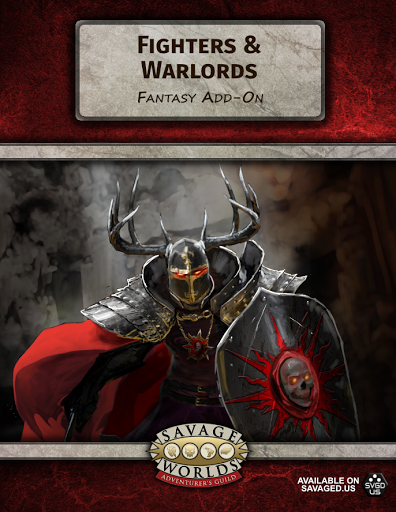 The first section of the book is about medieval weapons, both melee and ranged, including black powder weapons. Let me say this straight: this chapter alone (23 pages) is worth the price, if you plan to run a fantasy (or historical) game. Why? Because it lists a LOT of weapons, and makes them interesting and different, while staying true to the FFF spirit of Savage Worlds. The sheer amount and variety of weapons means more interesting options for players, which is always good.

The second chapter introduces new Edges. Some of these were, in my opinion, sorely needed and are very good to finally have, such as those empowering two-handed weapons, which have no dedicated Edge in Savage Worlds core.

Weapon Proficiency is also introduced. It is an Edge which replaces Trademark Weapon, and offers unique effects for each weapon category, so I consider this a good addition too.

The next session is about Combat Options, i.e. specific maneuvers such as Reload, Grapple, or Trip. This chapter does a great job at both clarifying existing mechanics (such as Grapple), and/or adding more options (such as FORCE THROW for Grapple!)

Exactly like the other books in the series, the final chapter consist of a group of "sample characters". These eleven characters are presented at various ranks, from Novice to Heroic, and can be useful both as premade player characters or as NPCs. Each includes an interesting background and a sort of combat guide explaining how to put to use their Edges, skills and gear.

All in all this is a very good book, highly recommended if you enjoy a deeper combat, with more options for your players, and it is also part of a bundle collecting all the fantasy Add-Ons by Cyril Ronseaux. 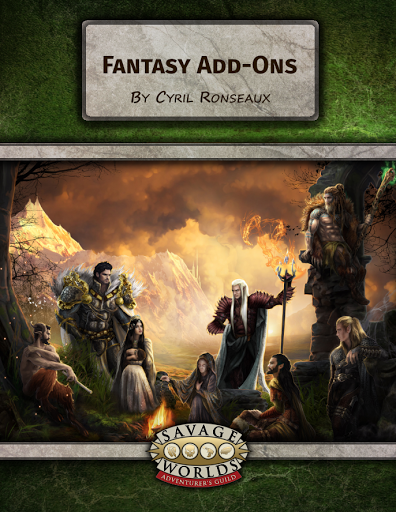 As a way of celebrating the holiday season, we've put up a special, limited time bundle with four Gold & Glory products! 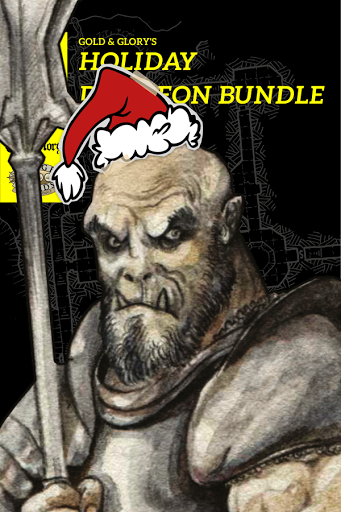 So what's inside? Let's take a look! 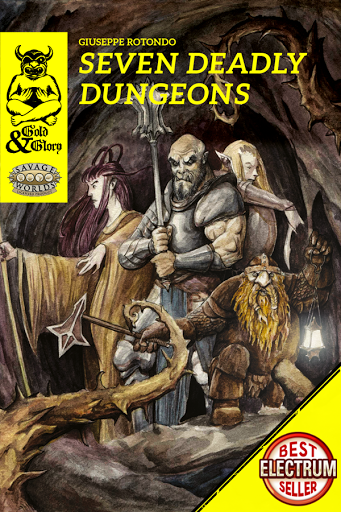 Gold & Glory - Seven Deadly Dungeons: The acclaimed core book, a toolkit to play classic fantasy dungeon adventures with close to no preparation, with Savage Worlds Adventure Edition. It features a random character generator that actually works, two new arcane backgrounds, setting rules for dungeons, simplified encumbrance, LOTS of new monsters and magic items, the Dungeon Deck system, and the titular Seven Deadly Dungeons: seven dungeon adventures that you can play dozens of times, and will always be new and engaging, thanks to the randomizing of the Dungeon Deck system. 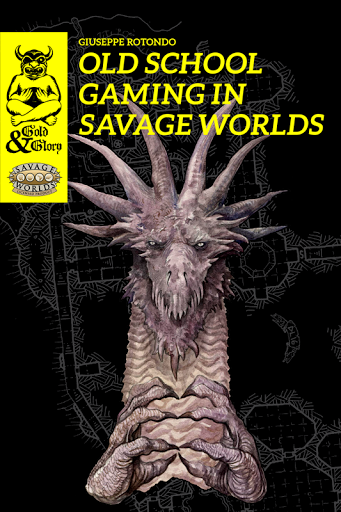 Gold & Glory - Old School Gaming in Savage Worlds: A simple guide to enrich and empower the old school style in your Savage Worlds games - wether you're playing Gold & Glory or not! Topics such as player skill vs character skill, risk/difficulty/reward, linear and non-linear adventuring, attrition, and Gold & Glory as a toolbox for YOUR games! 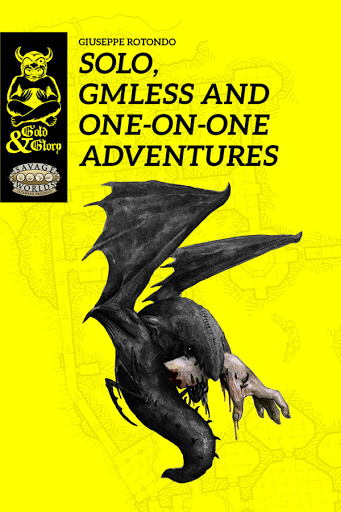 Gold & Glory - Solo, GMless and One-on-One Adventures: The best-selling guide to play Gold & Glory games in a variety of modes. Also includes the Abstract Clues system, which you can use in ANY type of game, and rules for hiring various types of henchmen, a useful resource for solo and one-on-one games! 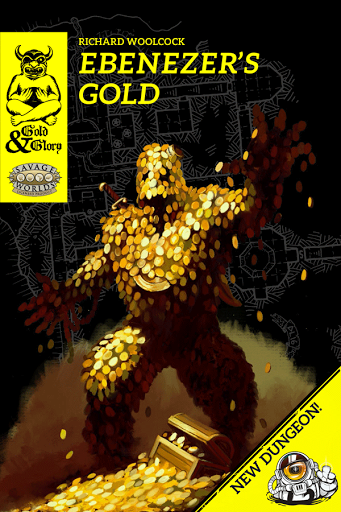 Gold & Glory - Ebenezer's Gold: A festive-themed dungeon adventure by acclaimed Savage Worlds guru Richard Woolcock, and part of the Deadly Dungeon Hosts series. Will the heroes find Ebenezer's Gold, or will they fall victims to his greed, just like him?
The limited time Holiday Dungeon Bundle is available at a special price at DrivethruRPG! 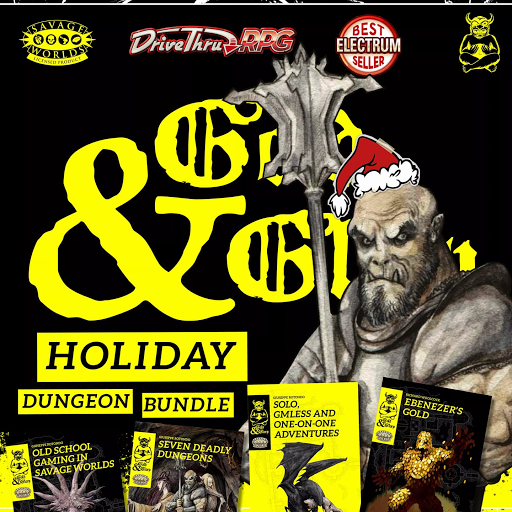 About the Inn Between Worlds

Inn Between Worlds is a supplement for Savage Worlds Adventure Edition, designed by Robert Sullivan, and released under the SWAG license. 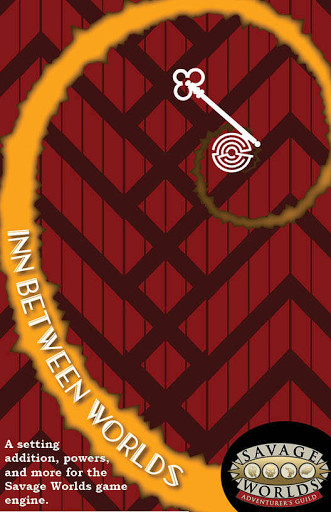 It has immediately piqued my interest because of the unique type of content, which I'm going to explain now.

The first chapter of the book describes the Inn (which doubles as a caravanserai or modern hotel, so as to suit the current campaign type), detailing the structure and all its locations. It includes a sort of mini-game to randomly generate the features of the Inn, with the option of involving the whole group in the process, making it the core of a session: a cool idea IF you are going to use the Inn as the home base of the group, or the center of a small campaign. All the relevant, possible features of the Inn are described in detail, so they are ready to use. Note that the download also includes fully detailed maps of both the caravanserai and hotel versions of the Inn, if you don't want to generate your own.

The second chapter details all the relevant NPCs: owners, staff, and customers.

The third chapter describes the "Cascade": a tearing in time/space that turns the Inn into a multidimensional location. That's why it is an Inn Between Worlds, and the cool idea that you may use to connect various Savage Worlds settings. This chapter has random tables for locations and encounters through the Cascade, and then tables for random destinations: the cool thing here is that each destination result is briefly described, and also includes a small list of possible published setting books that may be used for that destination!

The fourth chapter is about encounters and plot hooks revolving around the Inn, including a few bizarre creatures and tables to get the party involved.

The last chapter introduces a few new Edges and Hindrances and a new Arcane Background and powers, all related to the Cascade and its effects.

As you can see, the book is designed to be plugged into any type of campaign.

The book states classics such as Hodgson's House on the Borderland and the films The Saragossa Manuscript, The Cell and Being John Malkovich, along with M. C. Escher's art, as its sources of inspiration: such works clearly contributed to the inter-dimensional features of the Inn.

One interesting feature of the book is that it makes ample use of references to the TV Tropes, instead of detailing typical story elements that may come into play in association with various places and NPCs.

As a whole, is the kind of supplement that's suited for GMs who like to cook their own campaigns and adventures, and are happy to find ready-made locations, foes, and adventure hooks. This includes dropping most of the book (and Inn, and time/space fracture) as is, in settings such as Deadlands or East Texas University, which can definitely handle all the weirdness going on; or picking just the interesting bits.

All in all, it is a very atypical supplement, with a lot going on, and one which will require some extra GM work, but full of ideas and re-usable bits. Considering the price (just $2.50 at the time of writing, which makes me forgive the very basic layout), I definitely recommend it if you think you might want to make an inn, hotel or similar establishment the centerpiece of a campaign or the setting for some adventures (even without the Cascade thing). It may serve as a Rippers Lodge for sure!